For the many owners and collectors of Zeiss Ikon cameras, who love and admire the high quality of the fine, old cameras from Dresden and Stuttgart, it is maybe interesting to hear something about the people who did work in the factory, even if the story is a very subjective one.

I had my first contact with the Zeiss Ikon  company in Dresden in december 1943 or 1944  when I was about five years old. Together with my parents and my brother I joined the Christmas party, which the company had arranged for the children of their employees.
At that time Zeiss Ikon didn´t produce cameras any more, because all efforts were concentrated to support the war machinery. Among many other items Zeiss Ikon was specialised in making instruments for the German Luftwaffe. 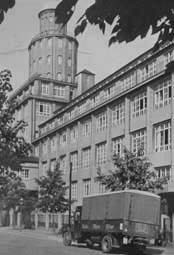 Ernemann Werk at Junghansstrasse, which characteristic tower years later on became the logo of Pentacon,
Ica Werk nearby at Schandauer Strasse
Werk Reick at Mügelner Strasse in the southern part of Dresden
and
Goehle Werk in the northern outscirts of the town.

Further there were the Goerz Werk in Berlin and the Contessa Werk in Stuttgart. 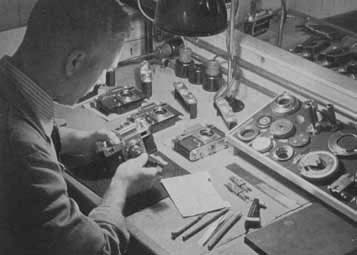 Please take a look at the picture of the new building of the Ica Werk from 1937!
You will notice that the staircase is built like a fortress. It shows that Zeiss Ikon was prepared for war already at that time. 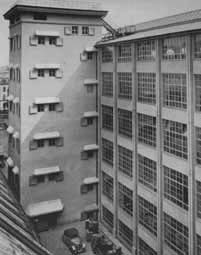 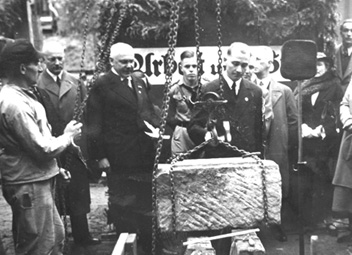 21.5.1936
Laying down the foundation stone to the new Ica-building
The man with the hammer is my father
The other gentleman is Dr.Alexander Ernemann

And the war came to Dresden:
In the night between the 13th and the 14th of February 1945 my family and I sat in the cellar of our house 5 miles away from the center of the town and were deeply shaked by the heavy bombing and by the enormous fire we saw in the distance. Next morning , when the air was full of black smoke and dirt and chocking people came walking out of the inferno, my father on a bicycle went to his office at the Ica-Werk. 80% of the factory was demolished and his office was complete destroyed.

A few months later the war was over and the Russians occupied the town. In Zeiss Ikon production machines and instruments were dismantled and sent to the Soviet Union. Then the company became nationalized and was given the name of " VEB Zeiss Ikon", which means "Volkseigener Betrieb = People Owned Enterprice".
The Goehle-Werk came into other hands, but the Ica-Werk, the Ernemann-Werk and Werk Reick were left to the company. A new production started with the completly new  designed  SLR camera Contax S,  the handy  Taxona,  the medium-format  Ercona  and with  cine cameras and  cine projectors.
I was a hungry little schoolboy and didn´t take notice of all that. Zeiss Ikon was for me only the name of the company where my father had been employed from 1926 to 1945 and the logo of my fathers pre-war Super Ikonta B, which we took all our family-photos with and which is still in my hands.

When I left school in 1953 I got connection to the Zeiss Ikon again. Now I became an apprentice as a toolmaker at the education-center of the VEB Zeiss Ikon in Werk Reick. We were about 600 apprentices, because the Zeiss Ikon also educated technical workers for all other camera factories in Dresden, except for the Ihagee Kamerawerk, which wasn´t nationalized and which produced the well reputed Exakta SLR camera.

In Werk Reick we had our own school, and except from the technical subjects we also learned about mathematics, physics, chemistry, german grammatics and literature, history and even athletics. Futhermore the Zeiss Ikon had its own library, its orchestra, its medical center and a sports ground. There were arranged Christmas parties, weekend tours and also a picnic with more then 2000 employees of the Zeiss Ikon, for which purpose the company had hired five paddle-steamers on the river Elbe.

The very negative side was that we were more and more controlled by the communists, like all other sides of the society. We were forced to join the communist youth organisation and with certain occassions to bear their blue uniform-shirt, which we hated.
For more practical training we apprentices were sent to other divisions. So for a time I worked in the toolmaking-department underneath the Ernemann-tower and another time in the KWN, where the wellknown Praktica and Praktina SLR-cameras were made.
In 1956 I finished my education and were sent to the KWN, which means Kamera Werke Niedersedlitz. The company had belonged to the american citizen Charles A. Noble, now it was a VEB and few years later it would be merged together with the other camera factories in Dresden to the VEB Pentacon.
Also in the KWN I worked as a toolmaker. But when the new medium-format SLR-camera Praktisix was developed and in a hurry finished to be shown at the Photokina 1956, I was asked to help in the developing-department to finish some small parts for the new camera. This was my first direct contact to camera production and servicing.

In the summer of 1957, four years before the Berlin Wall was raised, I moved to the Zeiss Ikon AG in Stuttgart. Here in the free world, in the former Contessa plant at Dornhalder Strasse in Stuttgart-Heslach, a new Zeiss Ikon had been re-established with the help of many people from Dresden. The flagship of the camera-line was the re-designed Contax IIa and IIIa, followed by the popular leaf-shutter SLR Contaflex, and then the Contessa, the Continas, the Ikontas, the Ikoflex and other models. 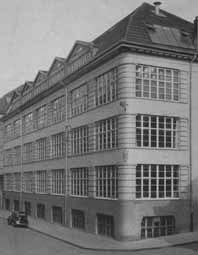 When I studied in the photoshops in Stuttgart I was surprised that no SLR camera with interchangable lenses and finders were made in Western Germany, except the Praktica-like Edixa Reflex from the Gebr. Wirgin in Wiesbaden. Leaf shutter cameras dominated the market. Years later I realized that this was the Achilles´ heel of the german photoindustry and one of the reasons for the collaps of the Zeiss Ikon AG in 1972.
Just with leaf shutters my work began at the Zeiss Ikon AG. From the Deckel factory in Munich and from the Gauthier factory in Bad Calmbach the Compur and Prontor shutters were delivered to the Zeiss Ikon in Stuttgart, and it was my job to check, to adjust and if necessary to repair the shutters before they were mounted in the camera bodies. 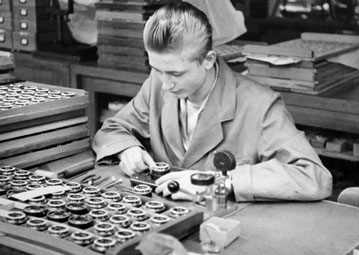 Checking Prontor shutters for the Contaflex

Later on I worked for more than one year in the department where the prototypes of the new cameras were manufactured. It was very exiting to follow the development of a new camera from a wooden dummy to the finished product.
As a very young and still rather unexperieced technician, I admired my skilled colleagues. Each of them was an expert. One was the specialist in making top covers. He was able to convert a flat plate of brass into a prisme-shaped SLR cover. Another technician milled the camera´s body out of a block of aluminium. When he received the drawing, he studied it for 3 days and coloured different areas before he started the milling. It took him about 3 weeks to make the body of the Contarex. 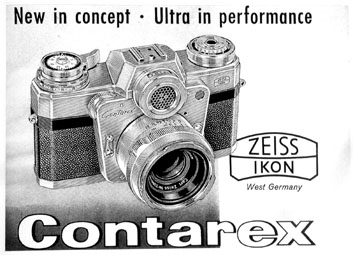 I remember we finished 6 Contarex cameras for the Photokina 1958. I myself made the round case around the lightmeter, tho so-called bullseye. In the beginning the mirror of the prototype Contarex didn´t return to down position after the camera had been released. Just a short time before the Photokina in Cologne a modification of the mirrorbox was made to make the mirror returned after exposure.
Around the same time the shape of the more simple cameras changed from the typical Zeiss Ikon style to a more round and handy design. Sometimes funny things happened. I remember that our foreman Herr Weber didn´t like the Symbolica or its name, because he shouted: "Why don´t you call it Idiotica?" When the first of these cameras was assembled, you could look into the mechanism, because a cap of approximately 2 mm occured between the front plate and the viewfinder frame. That was a simple mistake of the designer and it was necessary to make a new and bigger viewfinder frame. 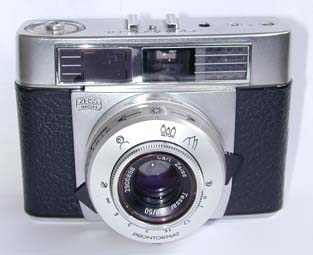 From the Zeiss Ikon AG in Stuttgart I do not remember Christmas parties and picnic tours as at the VEB Zeiss Ikon in Dresden. But at Christmas time we were given a gratuity as a percentage of our salary. The company also had a well-assorted library. I borrowed many books, and through them I for the first time received a knowledge about World War II and about the history and the crimes of nazism.
Thanks to the old director Christian Steinmetz, who, exept for 10 years in communist prisoner camps, had worked for the Zeiss Ikon since 1910, I received a complete education in repairing Zeiss Ikon cameras, before I left for a job in Denmark. Half a year I spent at the service department and, which maybe was the most exiting, at the assemling line of the Contax.
The production of the Contax had been cancelled in 1958 but was taken up again for a period. 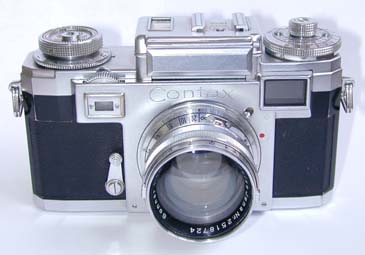 Each Contax which came for repair was completly disassembled and then sent through the assembling line for a complete overhaul. At the assembling line uneducated women and skilled technicians were mixed together. The women worked faster and the technicians worked more accurate, and it was the intention of the factory that these two groups should influence each other in a positive way.

On my way to Scandinavia I had a 3 weeks stop-over at the Gebr. Wirgin in Wiesbaden to learn the Edixa Reflex. It was very interesting for me to compare the Wirgin way of making a camera with that of the Zeiss Ikon. In the Zeiss Ikon each part was manufactured  with  great accuracy  and quality,  so it did fit  when the camera was assembled.  Only small adjustment were necessary. At the Wirgin factory the parts were manufactured very roughly. With the assembling of the camera technicians had to file,  to polish,  to bend  and to adjust  each part  before it did fit to the mechanism.  Nowadays  the  Edixa Reflex is near forgotten. But the Contax and her sisters are still of great interest for the collectors of cameras and for the lovers of the Zeiss Ikon brand.

Today i am working at the  Nikon agent in Denmark.  Through  my  life  goes a line from the  Zeiss Ikon as a superior camera-maker, who gave me a very good start and background forty years ago, to the japanese Nikon Company with the most excellent SLR cameras in the world.